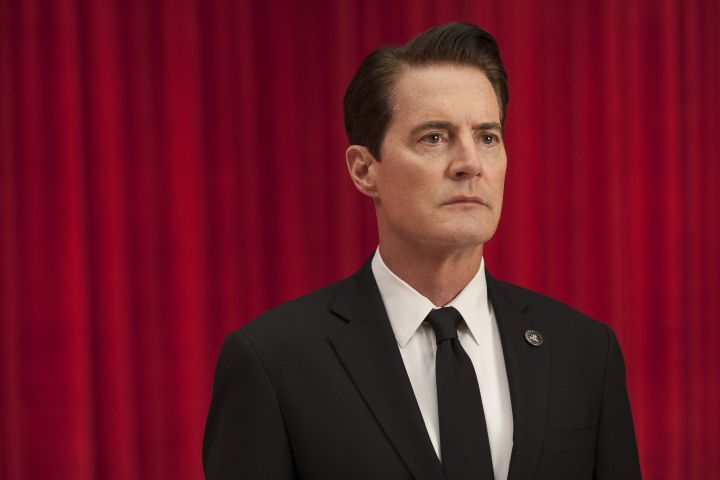 “It is happening again.”

Two years ago, I first watched Twin Peaks. I actually bought the entire series without having watched any of it before based on recommendations by a few different people. Since then it has become one my favourite shows of all time. Maybe even the one top favourite. And given that the series ended in 1991 on a massive cliffhanger, I was always eager to see more of it. Considering the massive 25 year long cliffhanger, I actually got the lucky end considering the announcement of a new season came just after I finished watching the whole thing for the first time.

And I can say that after that 25 year wait, these first two episodes are well worth it. Although they might seem a bit more Eraserhead than the classic Twin Peaks, the distinct style is still there, especially in the new Black Lodge sequences. We briefly see glimpses of what the classic characters have been up to: Hawk, Andy and Lucy are still working in the sheriff’s station, Ben and Jerry are now dealing legal marijuana, the arm is now a talking tree with a brain on it. The usual.

We also get a look at some of the new characters, Sam Colby, a college student assigned to watch over a mysterious glass box, Bill Hastings, a school principal arrested for the murder of a librarian, as well as some associates of Cooper’s doppelganger (Mr C) who now has Bob-like long hair and uses Cooper’s FBI access to download information regarding to a prison for unknown reasons. Meanwhile, the real Cooper is still stuck in the Black Lodge after 25 years with The Giant, MIKE, Laura Palmer, and in a surprise appearance Leland Palmer. After all this time, Mr C is scheduled to return to the Lodge but he states here that he has other plans. Cooper seemingly gets let out though by the arm’s sinister doppelganger (also a brain tree), leaving his story so far on a cliffhanger.

Many shows in recent years have tried to imitate the style of Twin Peaks – The Killing, Bates Motel, True Detective, even Fargo to an extent – but none of them ever reach the true madness/genius of David Lynch’s work, which remains to this day one of the most original, unusual, and unique styles in filmmaking. David Lynch knows how the medium is meant to deceive you. In the scene of Sam watching over the glass box, we go over endless shots of the box, the cameras watching, the storage of the footage from the cameras, Sam watching over it all. He knows you’re meant to expect something. It doesn’t matter what, but he leaves it long enough for your mind to obsess over what could happen. He knows what the viewer will perceive, and he uses it to his advantage.

Although I wouldn’t recommend this to a new viewer (I think it maybe relies on a fair bit of memory of the original) I would heavily recommend it to anyone looking to come back to it after all these years. It may have a different edge to it, with a bit more horror than quirk so far, but this still has the major elements of the Twin Peaks that people know and love.

But to anyone who hasn’t watched the original series, you need to go and watch it. Seriously. You won’t regret the journey.