“Why should I vote?” “It doesn’t matter, they’re all the same anyway.” “When has one vote ever counted.” These are all statements and excuses I’ve heard from people I know either planning not to vote or who have never voted at all.

I find it heavily depressing how many people I hear planning on refusing to use their democratic right to a vote, especially in a time where the issue can’t seem to affect us more – Brexit, the NHS, state pensions, student fees (again), or security from events like the NHS server attack or the tragic Manchester bombing. I would find it disappointing to see this amount of refusal in any election, but in this one especially so.

There may be some truth in one vote never counting. I might be able to reason with that. But the fact of the matter is that one person claiming their vote doesn’t count brings another person with them. And another. And another. And then in 2015, 35% of registered voters didn’t vote in the last general election. That amount, by the way, was almost larger than the amount any party received in votes. In context, the largest was the 36.9% of votes for the Conservatives. 15.7 million non-voters. Another 28% of registered voters didn’t vote in the EU referendum last year. But these numbers now become much larger when you factor in people who were unregistered to vote in 2015 or 2016, as well as people like myself who are now old enough to vote but weren’t in either of those pollings.

As for the idea that all politicians are the same, they won’t be the same if you get involved in electing MPs you believe in. Whether it’s getting involved in events like canvassing, or just turning up to vote. Change never happens from the top down. It happens from the bottom up when regular people get involved to make change they believe in. Politicians only become the same when people become disillusioned with the political process. Which is what could happen here if we don’t get involved. Regardless of my own opinions and views, I’m not going to say who you should vote for. Whether you would be Conservative, Labour, Lib Dem, Green, whoever, it doesn’t matter. What does matter is making change you believe in.

As for the somehow catching conspiracy theory-like idea that you shouldn’t register to vote because the government will know where you live, you’re already on a legally required census. It is literally illegal to not be on some sort of register by now. Get over yourself.

A personal political influence of mine, Senator Bernie Sanders once said, “Change will not take place without political participation.” I believe in that statement. We need change. Don’t throw away your right to vote. Not this time. Not in this election. Hopefully, not ever. 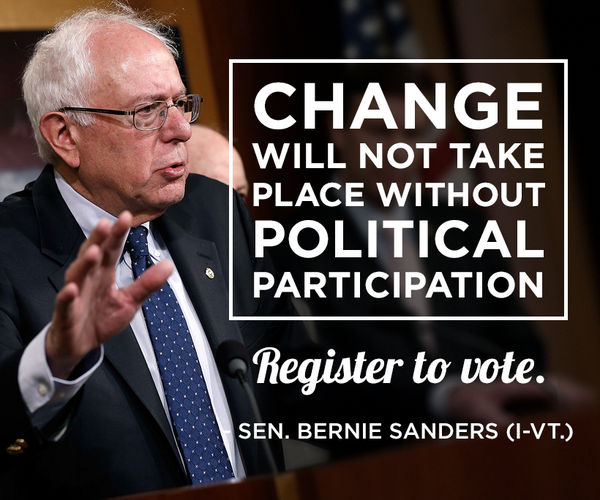